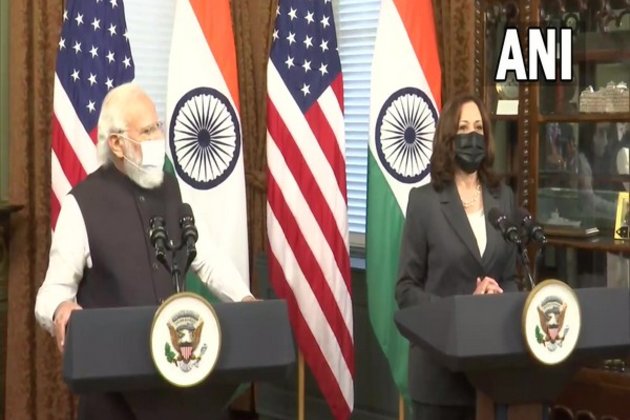 Washington [US] September 24 (ANI): Prime Minister Narendra Modi on Thursday met with US Vice President Kamala Harris here, a day ahead of his highly anticipated bilateral meet with US President Joe Biden.

This was PM Modi's first in-person meeting with Harris after she made history by becoming the first Indian-origin person to become the Vice President of America.

Earlier in June this year, PM Modi held a telephonic conversation with Harris and discussed the US' strategy for global vaccine sharing and Quad vaccine initiative to fight the COVID-19 pandemic.

In a statement before leaving for the US, the Prime Minister had said he is looking forward to meeting Vice President Kamala Harris to explore opportunities for cooperation between our two nations particularly in the area of science and technology.

Earlier in the day, PM Modi met US Vice President Kamala Harris, Australian PM Scott Morrison and held meetings with five global CEOs for potential investment in India. These talks were part of series of meetings that Prime Minister Modi undertook with select heads of corporates that have the potential to invest significantly in India.

Earlier on Wednesday, Prime Minister Modi arrived in Washington for his much-touted US visit. He had earlier addressed the Global COVID-19 Summit called by US President Biden.

Biden is scheduled to host PM Modi at the White House on September 24. This is going to be the first in-person meeting between the two leaders after Biden took over as the US President on January 20.

PM Modi's US visit will conclude on September 25 with an address at the United Nations General Assembly focusing on the pressing global challenges including the Covid-19 pandemic, the need to combat terrorism, climate change and other important issues.

The high-level session of the UNGA began on Tuesday in New York. The theme for this year's General Debate is 'Building Resilience through hope to recover from COVID-19, rebuild sustainably, respond to the needs of the planet, respect the rights of people, and revitalise the United Nations'. (ANI)

Court orders US to reinstate 'Remain in Mexico' policy for migrants

SAN DIEGO, California: The Biden administration will return to a Trump-era border policy in which migrants will have to remain ...

WASHINGTON D.C.: The U.S. Transportation Security Administration (TSA) has confiscated a record number of guns at airport check-ins in 2021.TSA ...

UK to return to Nigeria statue taken in 1897

LONDON, England: A bronze rooster, taken from what is now Nigeria by British troops in 1897, will be returned to ...

BOLZANO, Italy: According to a scientific study published in the journal Current Biology, workers at a salt mine in Austria ...

BEIJING, China: An app used by Muslims throughout the world, Quran Majeed, has been removed by Apple at the request ...

Court orders US to reinstate 'Remain in Mexico' policy for migrants

SAN DIEGO, California: The Biden administration will return to a Trump-era border policy in which migrants will have to remain ...

WASHINGTON D.C.: The U.S. Transportation Security Administration (TSA) has confiscated a record number of guns at airport check-ins in 2021.TSA ...

SAN FRANCISCO, California: The Silicon Valley home of Tesla founder Elon Musk, which he originally bought for $29.85 million in ...

WASHINGTON D.C.: U.S. Secretary of Interior Deborah Haaland has announced that the U.S. government will auction lease agreements for seven ...

Many Amazon employees to be allowed to continue working from home

CUPERTINO, California: In a shift from its previous policy that employees would need to be in company offices at three ...