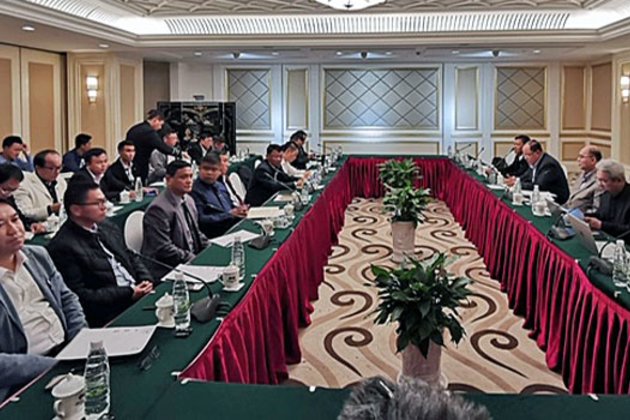 Myanmars military negotiation team will meet separately with each of the groups on March 22, they said.

The letters, dated March 13 and signed by Zaw Htay, government spokesman and director general of President Win Myints office, requested that each organization send a team with a leader and a member from their respective ethnic armed groups to meet with government negotiators.

Colonel Naw Bu, spokesman of the Kachin Independence Army (KIA), the armed branch of the KIO and the leading group in the Northern Alliance collation of four ethnic armies that operate in northern Myanmar, said he could not yet confirm the Kachins participation in the talks because the members of the alliance must first discuss the invitation among themselves.

Khine Thukha, spokesman for the Arakan Army (AA), the armed wing of the ULA which is fighting the Myanmar Army in Rakhine state, said he could not confirm the attendance of AA delegates at the talks because the groups leaders are still discussing the invitation.

The KNPP said it would participate in the negotiations and would discuss topics based on proposals from the government side.

The invitations also said that Myanmars military would discuss the temporary unilateral cease-fire that it declared in December 2018 in five of its command regions to try to kick-start the stalled peace process, when officers meet with delegates from the ethnic organizations.

The truce runs through April, but excludes the Western Command where government soldiers are battling the Arakan Army (AA). The Myanmar military is also engaged in ongoing conflicts with the KIA and the Shan State Army-North, the armed wing of the SSPP, in northern Shan state.

More talks coming out of this

The ruling National League for Democracy (NLD) government has held periodic peace conferences in a bid to get the remaining ethnic armies to sign the nationwide cease-fire agreement (NCA), which 10 ethnic militaries have already inked.

The civilian-led government under State Counselor Aung San Suu Kyi has made the NCA a prerequisite for ethnic armies to participate in periodic peace negotiations, known as the 21st-Century Panglong Conference and the Union Peace Conference, to try to end decades of armed conflict that have stymied the countrys transition to a democratic federal union.

About a dozen ethnic armies have yet to sign the NCA.

The NRPC, chaired by Aung San Suu Kyi, decided to schedule the talks after members of the official Myanmar Peace Commission (MPC) held informal discussions with the KIO, PSLF, MNTJP, and ULA in February in Kunming, in southwestern Chinas Yunnan province. Government peace negotiators also met with the KNPP in northern Thailand in March.

The Myanmar military met with the SSPP in February and with the RCSS in March for separate talks.

Hla Maung Shwe, an advisor to the MPC, said the upcoming session will serve as the governments orientation to the peace process for the NCA non-signatories.

We are planning to meet the KNPP in a few days, so the government has now invited all [NCA] non-signatory groups to clarify the situation, Hla Maung Shwe said.

One Myanmar political analyst said he welcomes the peace talks as a rekindling of negotiations that were put on hold after the third round of the 21st Century Panglong Conference in July 2018. But he cautioned people not to expect too much from next weeks discussions.

It is good to see peace talks at a time of endless armed confrontations and miscommunications, but we shouldnt be expecting too much out of these talks, said political analyst Maung Maung Soe. I expect, at most, there will be more talks coming out of this later.

International rights groups did not have sanguine views about the new round of talks, noting that Myanmars military has not committed to ending violence in the country.

Over the last several years, its been very disappointing to see how the peace process has essentially failed, said Matthew Smith, chief executive officer of Southeast Asia-based Fortify Rights.

One of the things were most concerned about in the failure of the peace process is the fact that the military has continued to commit human rights violations against civilians while talking about trying to establish peace, and these two things obviously are inconsistent with each other, he said.

Smith also called for more genuine dialogue among stakeholders for the peace process to have a chance to succeed.

When the fighting continues, when the attacks continue, when human rights violations continue, that leads people that are involved in the process to think that its disingenuous, and that harms the overall process, he said.

It appears that the Tatmadaw [Myanmar military] is not ready to offer any meaningful concessions for the ethnic groups, nor is it prepared to allow for any degree of autonomy for ethnic organizations to operate their own affairs, he said. I dont know why the Burmese government continues to follow the lead of the Burmese military, when its clear that the military often does not want peace.

The militarys positions in terms of the NCAthe failure to deal with basic political issues during peace talks, its unwillingness to restrain its soldiers, its unwillingness to end attacks against civilians, and the way it operates in ethnic minority regionsare the reasons why the peace negotiations have gone nowhere, he said.

Robertson also said the governments working in lockstep with the powerful armed forces has meant that the militarys positions have influenced the administration in a way that has been unhelpful.

Unless the government is prepared to deal with the rights-abusing behavior of the Tatmadaw, its going to be very, very difficult to see any sort of peace, he said.

In violence ridden Rakhine state, meanwhile, a clash between the Myanmar Army and AA in Mrauk-U township on Thursday injured two villagers, one of whom was seriously wounded and had to be taken to a hospital in the state capital Sittwe for urgent treatment, said local volunteers who helped the men.

The two menone from Bu Ywat Ma Hnyo village and the other from Mrauk-U towns Aung Tat wardwere injured during a skirmish near Waitharli village situated on the Yangon-Sittwe Highway, they said.

Twenty-five year-old Maung Soe Win is in critical condition because he was hit above his pubic bone and had to be taken to Sittwe Hospital to receive surgery, said Mrauk-U resident Than Tun.

Government troops responded by shooting to the direction of Bu Ywat Ma Hnyo village near the ambush site, wounding the two villagers and damaging some houses, area residents said.

RFA could not reach a Myanmar military spokesman for comment.

The Myanmar military has been engaged in deadly clashes with the AA in several Rakhine townships, including Mrauk-U, since hostilities between the two sides reignited in late 2018.

The hostilities have left an undetermined number of people dead and displaced more than 12,000, according to estimates by local and official sources in Rakhine state.