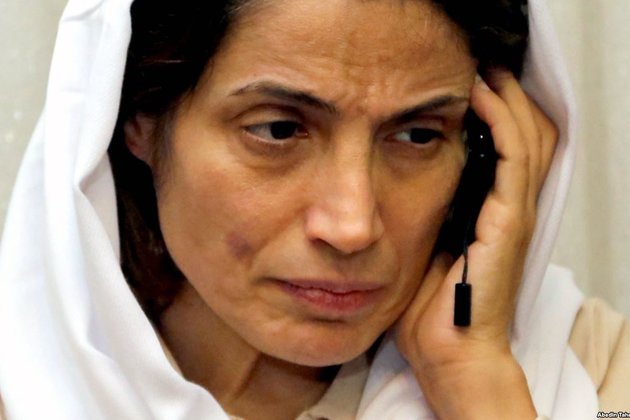 We are outraged to hear reports that the Iranian regime sentenced...Sotoudeh to 38 years in prison and 148 lashes, State Department spokesman Robert Palladino said on March 12.

This sentence is beyond barbaric, he added.

Meanwhile, the United Nations special rapporteur on human rights in Iran, Javaid Rehman, accused the Iranian government of stepping up its repression of human rights activists, lawyers, and trade unionists.

In the absence of an announcement from Iranian authorities, there have been conflicting reports and statements about the length of the sentences imposed on Sotoudeh.

Her husband, Reza Khandan, said she has been sentenced to an extra 10 years in prison on top of the five-year term she is currently serving.

Khandan told the AFP news agency on March 12 that the new 10-year sentence was the longest of seven verdicts totaling 33 years in prison and was communicated to Sotoudeh in prison.

But Khandan said that 'only the longest sentence [in the latest case] will be served.

He said Sotoudeh had also been sentenced to a total of 148 lashes for appearing in court without a head scarf and for another offense.

The lawyer had been found guilty of charges including 'encouraging corruption and debauchery, 'colluding [and] propaganda against the system, and disrupting public order,' according to Khandan.

Earlier this week, a judge at Tehran's Revolutionary Court said that Sotoudeh had been sentenced in her latest conviction to five years for colluding against the system and two years for insulting Supreme Leader Ayatollah Ali Khamenei.

Sotoudeh, the co-winner of the European Parliament's 2012 Sakharov Prize for Freedom of Thought, was arrested in June 2018 and ordered to serve a five-year sentence imposed on her in absentia in 2016.

The lawyer in 2018 represented several of the women detained for removing their head scarves in public to protest against the countrys Islamic dress code.

An outspoken critic of the Iranian establishment, Sotoudeh previously spent three years in prison on security charges after representing dissidents arrested during mass protests in 2009 against the disputed reelection of President Mahmud Ahmadinejad.

She has denied all charges against her.

Speaking at a press briefing in Washington, Palladino said that Sotoudeh was sentenced in absentia without a fair trial by the notorious revolutionary court, which is led by Judge Moghiseh, an accused human rights violator.

He said that the United States is calling on all of our partners and allies to speak out and demand the release of this courageous human rights defender and all those arbitrarily detained immediately.

The Iranian regime makes a mockery of the entire legal system in Iran, placing innocent people at the mercy of accused human rights violators, he added.

In Geneva, Rehman called the latest case against Sotoudeh 'a crystal-clear illustration of an increasingly severe state response.'

Speaking on the sidelines of a UN Human Rights Council session, Rehman said that there was an increasing concern that the civil space for human rights lawyers and defenders is being reduced.'

'It is deeply concerning. There is deepening repression,' he told journalists.

A spokeswoman for the European Commission called for an immediate review of Sotoudehs case, saying that her trial featured 'a number of other violations of the right to due process.'

Amnesty International condemned the case against Sotoudeh as an outrageous injustice, while Human Rights Watch called the it a threat aimed at every human rights advocate in Iran to stop defending human rights.

With reporting by AFP RFE/RL

RFE/RL journalists report the news in 26 languages in 22 countries where a free press is banned by the government or not fully established. We provide what many people cannot get locally: uncensored news, responsible discussion, and open debate.